This cartoon offers a simple yet powerful message about perspective and point of view. Though the characters appear superficially identical, they express different interpretations of a single object (the numeral 6 or 9) based on their viewing location. The cartoon invites the viewer to extend this idea of multiple perspectives into other situations. 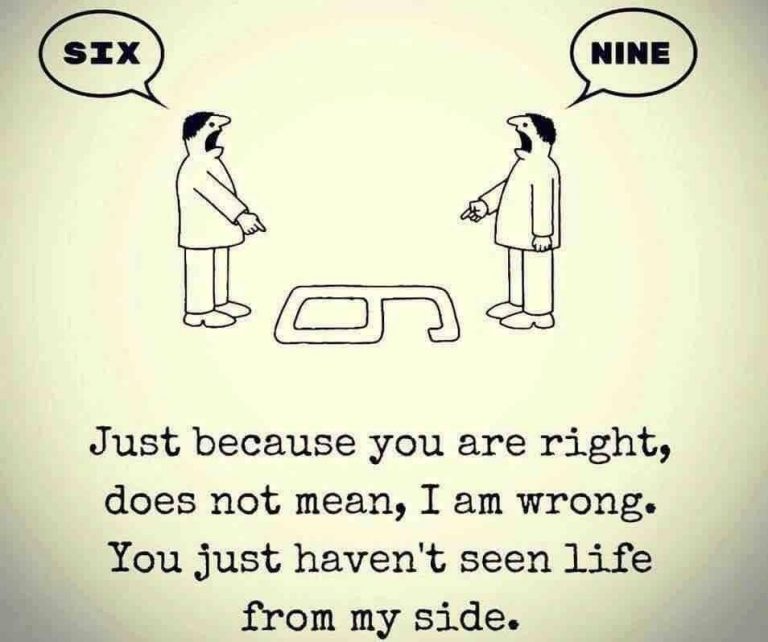 This cartoon was used to illustrate an announcement for a course on developing intercultural competence, and very simply shows the possibility for people having different interpretations of the same thing depending on each person’s perspective. While the characters in this cartoon appear superficially identical, their internal perceptions are different. In addition, the cartoon is very clear that both perceptions are right; neither is wrong.

In the context of developing intercultural competence, the cartoon makes the point that if people who appear identical can have different, yet equally correct points of view on the same topic or idea, then one should expect the same from people with different cultural backgrounds. On the Intercultural Development Continuum, this understanding would arise in someone with an intercultural mindset. Intercultural competence first requires people to be aware of their own perceptions, and how much those perspectives are based on their own cultural lens. It’s felt that only after achieving self-awareness can a person develop acceptance of cultural differences and similarities. Adaptation to cultural challenges, by modifying both behavior and perspective, is the goal of most cultural competency trainings.

In the cartoon, it’s easy to see how each character could adapt to see the other’s point-of-view--by standing side-by-side. Obviously in real life, adaptation is much more complicated, but the simplicity of the cartoon offers a hopeful message that intercultural understanding is possible.

This cartoon can be found, in several different forms, from an image search of “six nine right wrong.”